Item Successfully Added to Cart
An error was encountered while trying to add the item to the cart. Please try again.
Continue Shopping
Go to Checkout
OK
Please make all selections above before adding to cart
OK
The following link can be shared to navigate to this page. You can select the link to copy or click the 'Copy To Clipboard' button below.
Copy To Clipboard
Successfully Copied!
Factorizations in Local Subgroups of Finite Groups
G. Glauberman
A co-publication of the AMS and CBMS 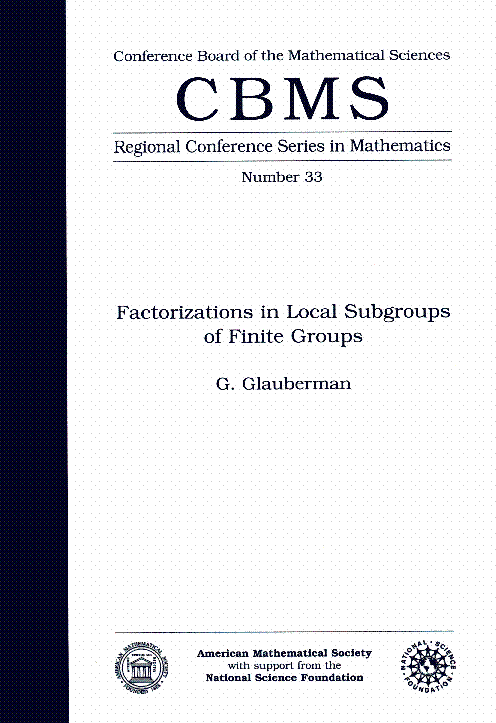 Click above image for expanded view
Factorizations in Local Subgroups of Finite Groups
G. Glauberman
A co-publication of the AMS and CBMS
Available Formats:
Add to cart
Bundle Print and Electronic Formats and Save!
This product is available for purchase as a bundle. Purchasing as a bundle enables you to save on the electronic version.
List Price: $43.50
Add bundle to cart
CBMS Regional Conference Series in Mathematics
Volume: 33; 1977
MSC: Primary 20;

This monograph focuses on progress in the study of Sylow subgroups and their influence on the structure of the group as a whole. This research has been applied to other areas of finite group theory, including classification of simple groups, but is also of independent interest and does not require extensive background or long proofs.

In 1969, the author gave a report on this topic which appeared in the book (edited by M. B. Powell and G. Higman, Academic Press, 1971; MR 48 #6228). The present monograph covers progress since 1969. It includes some new results of Yoshida on transfer, a partial analogue for \(p-2\) of the author's “\(ZJ\)-Theorem”, and the classification of all simple groups which are \(S^4\)-free, i.e., in which the symmetric group of degree four is not involved. It also includes an expository account of recent work of M. Aschbacher, B. Baumann, R. Niles, and others on “failure of factorization”, “pushing-up” arguments, and related subjects.

This is not an expository work. This work should be accessible to advanced graduate students. In particular, a semester's study in finite group theory beyond the M.A. or M.S. degree should be adequate background, e.g., Chapters 1–3 and 5–7 of Gorenstein's (Amer. Math. Soc., 1974; MR 50 #2312). The book supplements the author's report in Familarity with this report is recommended but not assumed.