Item Successfully Added to Cart
An error was encountered while trying to add the item to the cart. Please try again.
Continue Shopping
Go to Checkout
OK
Please make all selections above before adding to cart
OK
The following link can be shared to navigate to this page. You can select the link to copy or click the 'Copy To Clipboard' button below.
Copy To Clipboard
Successfully Copied!
Prescribing the Curvature of a Riemannian Manifold
Jerry L. Kazdan
A co-publication of the AMS and CBMS 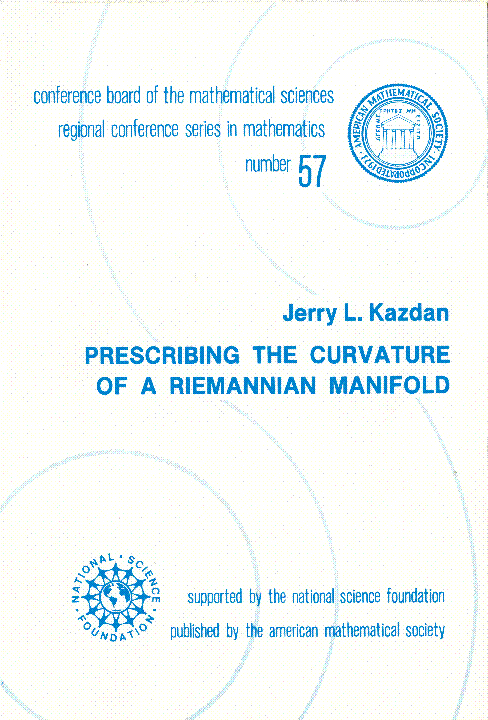 Click above image for expanded view
Prescribing the Curvature of a Riemannian Manifold
Jerry L. Kazdan
A co-publication of the AMS and CBMS
Available Formats:
Add to cart
Bundle Print and Electronic Formats and Save!
This product is available for purchase as a bundle. Purchasing as a bundle enables you to save on the electronic version.
Add bundle to cart
CBMS Regional Conference Series in Mathematics
Volume: 57; 1985; 55 pp
MSC: Primary 53; Secondary 58;

These notes were the basis for a series of ten lectures given in January 1984 at Polytechnic Institute of New York under the sponsorship of the Conference Board of the Mathematical Sciences and the National Science Foundation. The lectures were aimed at mathematicians who knew either some differential geometry or partial differential equations, although others could understand the lectures.

Author's Summary:Given a Riemannian Manifold \((M,g)\) one can compute the sectional, Ricci, and scalar curvatures. In other special circumstances one also has mean curvatures, holomorphic curvatures, etc. The inverse problem is, given a candidate for some curvature, to determine if there is some metric \(g\) with that as its curvature. One may also restrict ones attention to a special class of metrics, such as Kähler or conformal metrics, or those coming from an embedding. These problems lead one to (try to) solve nonlinear partial differential equations. However, there may be topological or analytic obstructions to solving these equations. A discussion of these problems thus requires a balanced understanding between various existence and non-existence results.

The intent of this volume is to give an up-to-date survey of these questions, including enough background, so that the current research literature is accessible to mathematicians who are not necessarily experts in PDE or differential geometry.

The intended audience is mathematicians and graduate students who know either PDE or differential geometry at roughly the level of an intermediate graduate course.