Item Successfully Added to Cart
An error was encountered while trying to add the item to the cart. Please try again.
Continue Shopping
Go to Checkout
OK
Please make all selections above before adding to cart
OK
The following link can be shared to navigate to this page. You can select the link to copy or click the 'Copy To Clipboard' button below.
Copy To Clipboard
Successfully Copied!
Harish-Chandra Homomorphisms for ${\mathfrak p}$-Adic Groups
Roger Howe
A co-publication of the AMS and CBMS 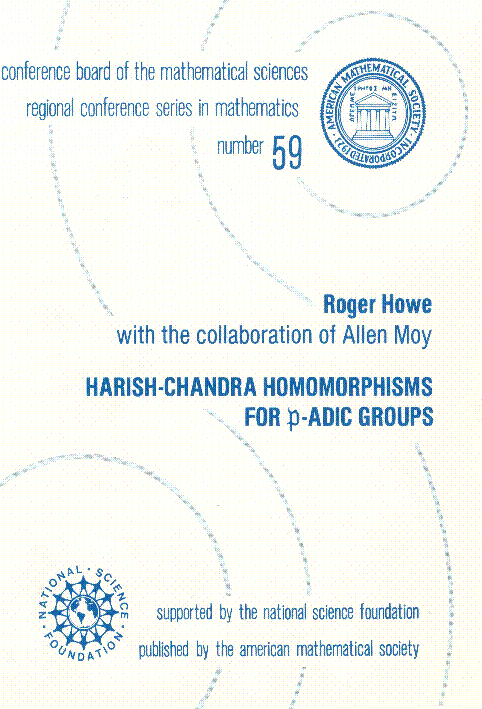 Click above image for expanded view
Harish-Chandra Homomorphisms for ${\mathfrak p}$-Adic Groups
Roger Howe
A co-publication of the AMS and CBMS
Available Formats:
Add to cart
Bundle Print and Electronic Formats and Save!
This product is available for purchase as a bundle. Purchasing as a bundle enables you to save on the electronic version.
List Price: $40.50
Add bundle to cart
CBMS Regional Conference Series in Mathematics
Volume: 59; 1985
MSC: Primary 22; Secondary 20;

This book introduces a systematic new approach to the construction and analysis of semisimple \(p\)-adic groups. The basic construction presented here provides an analogue in certain cases of the Harish-Chandra homomorphism, which has played an essential role in the theory of semisimple Lie groups. The book begins with an overview of the representation theory of GL\(_n\) over finite groups. The author then explicitly establishes isomorphisms between certain convolution algebras of functions on two different groups. Because of the form of the isomorphisms, basic properties of representations are preserved, thus giving a concrete example to the correspondences predicted by the general philosphy of Langlands.

The first chapter, suitable as an introduction for graduate students, requires only a basic knowledge of representation theory of finite groups and some familiarity with the general linear group and the symmetric group. The later chapters introduce researchers in the field to a new method for the explicit construction and analysis of representations of \(p\)-adic groups, a powerful method clearly capable of extensive further development.