Item Successfully Added to Cart
An error was encountered while trying to add the item to the cart. Please try again.
Continue Shopping
Go to Checkout
OK
Please make all selections above before adding to cart
OK
The following link can be shared to navigate to this page. You can select the link to copy or click the 'Copy To Clipboard' button below.
Copy To Clipboard
Successfully Copied!
Strings and Geometry
Edited by: Michael Douglas :  Rutgers University, Piscataway, NJ
Jerome Gauntlett :  University of London, London, England
Mark Gross :  University of California San Diego, La Jolla, CA
A co-publication of the AMS and Clay Mathematics Institute 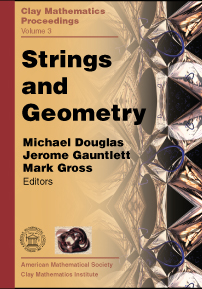 This volume is the proceedings of the 2002 Clay Mathematics Institute School on Geometry and String Theory. This month-long program was held at the Isaac Newton Institute for Mathematical Sciences in Cambridge, England, and was organized by both mathematicians and physicists: A. Corti, R. Dijkgraaf, M. Douglas, J. Gauntlett, M. Gross, C. Hull, A. Jaffe and M. Reid. The early part of the school had many lectures that introduced various concepts of algebraic geometry and string theory with a focus on improving communication between these two fields. During the latter part of the program there were also a number of research level talks.

This volume contains a selection of expository and research articles by lecturers at the school and highlights some of the current interests of researchers working at the interface between string theory and algebraic geometry. The topics covered include manifolds of special holonomy, supergravity, supersymmetry, D-branes, the McKay correspondence and the Fourier-Mukai transform.

The book is suitable for graduate students and research mathematicians interested in relations between mathematical physics and algebraic geometry.