Item Successfully Added to Cart
An error was encountered while trying to add the item to the cart. Please try again.
Continue Shopping
Go to Checkout
OK
Please make all selections above before adding to cart
OK
The following link can be shared to navigate to this page. You can select the link to copy or click the 'Copy To Clipboard' button below.
Copy To Clipboard
Successfully Copied!
Topological Methods in Nonlinear Functional Analysis
Edited by: S. P. Singh
S. Thomeier
B. Watson 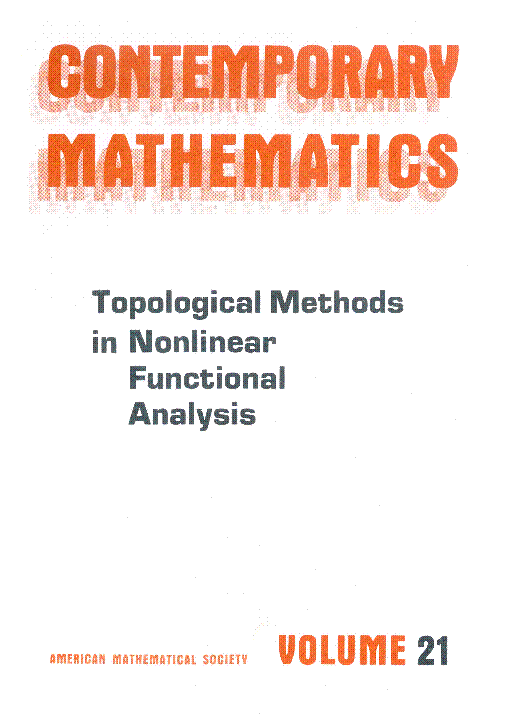 This volume contains the proceedings of the special session on Fixed Point Theory and Applications held during the Summer Meeting of the American Mathematical Society at the University of Toronto, August 21–26, 1982. The theory of contractors and contractor directions is developed and used to obtain the existence theory under rather weak conditions. Theorems on the existence of fixed points of nonexpansive mappings and the convergence of the sequence of iterates of nonexpansive and quasi-nonexpansive mappings are given. Degree of mapping and its generalizations are given in detail. A class of eventually condensing mappings is studied and multivalued condensing mappings with multiple fixed points are also given. Topological fixed points, including the study of the Nielsen number of a selfmap on a compact surface, extensions of a well-known result of Krasnosel′skiĭ's Compression of a Cone Theorem, are given. Also, fixed points, antipodal points, and coincidences of multifunctions are discussed. Several results with applications in the field of partial differential equations are given. Application of fixed point theory in the area of Approximation Theory is also illustrated.