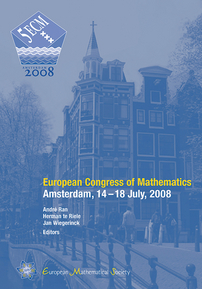 The European Congress of Mathematics, held every four years, has established itself as a major international mathematical event. Following those in Paris (1992), Budapest (1996), Barcelona (2000), and Stockholm (2004), the Fifth European Congress of Mathematics (5ECM) took place in Amsterdam, The Netherlands, July 14–18, 2008, with about 1000 participants from 68 different countries.

Ten plenary and thirty-three invited lectures were delivered. Three science lectures outlined applications of mathematics in other sciences: climate change, quantum information theory, and population dynamics. As in the four preceding EMS congresses, ten EMS prizes were granted to very promising young mathematicians. In addition, the Felix Klein Prize was awarded, for the second time, for an application of mathematics to a concrete and difficult industrial problem. There were twenty-two minisymposia, spread over the whole mathematical area. Two round table meetings were organized: one on industrial mathematics and one on mathematics and developing countries.

As part of the 44th Nederlands Mathematisch Congres, which was embedded in 5ECM, the so-called Brouwer lecture was presented. It is the Netherlands' most prestigious award in mathematics, organized every three years by the Royal Dutch Mathematical Society. Information about Brouwer was given in an invited historical lecture during the congress.

These proceedings contain a selection of the contributions to the congress, providing a permanent record of the best of what mathematics offers today.

Graduate students and research mathematicians interested in the lectures discussed at the 2008 5ECM.