Item Successfully Added to Cart
An error was encountered while trying to add the item to the cart. Please try again.
Continue Shopping
Go to Checkout
OK
Please make all selections above before adding to cart
OK
The following link can be shared to navigate to this page. You can select the link to copy or click the 'Copy To Clipboard' button below.
Copy To Clipboard
Successfully Copied!
Lectures on Real Semisimple Lie Algebras and Their Representations
Arkady L. Onishchik :  Yaroslavl State University, Yaroslavl, Russia
A publication of European Mathematical Society 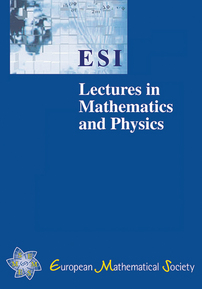 In 1914, E. Cartan posed the problem of finding all irreducible real linear Lie algebras. Iwahori gave an updated exposition of Cartan's work in 1959. This theory reduces the classification of irreducible real representations of a real Lie algebra to a description of the so-called self-conjugate irreducible complex representations of this algebra and to the calculation of an invariant of such a representation (with values \(+1\) or \(-1\)) which is called the index. Moreover, these two problems were reduced to the case when the Lie algebra is simple and the highest weight of its irreducible complex representation is fundamental. A complete case-by-case classification for all simple real Lie algebras was given in the tables of Tits (1967). But actually a general solution of these problems is contained in a paper of Karpelevich (1955) that was written in Russian and not widely known.

The book begins with a simplified (and somewhat extended and corrected) exposition of the main results of Karpelevich's paper and relates them to the theory of Cartan-Iwahori. It concludes with some tables, where an involution of the Dynkin diagram that allows for finding self-conjugate representations is described and explicit formulas for the index are given. In a short addendum, written by J. V. Silhan, this involution is interpreted in terms of the Satake diagram.

The book is aimed at students in Lie groups, Lie algebras and their representations, as well as researchers in any field where these theories are used. Readers should know the classical theory of complex semisimple Lie algebras and their finite dimensional representation; the main facts are presented without proofs in Section 1. In the remaining sections the exposition is made with detailed proofs, including the correspondence between real forms and involutive automorphisms, the Cartan decompositions and the conjugacy of maximal compact subgroups of the automorphism group.

Graduate students and researchers interested in Lie groups, Lie algebras and their representations and in related fields where these theories are used.