Item Successfully Added to Cart
An error was encountered while trying to add the item to the cart. Please try again.
Continue Shopping
Go to Checkout
OK
Please make all selections above before adding to cart
OK
The following link can be shared to navigate to this page. You can select the link to copy or click the 'Copy To Clipboard' button below.
Copy To Clipboard
Successfully Copied!
Handbook of Teichmüller Theory: Volume II
Edited by: Athanase Papadopoulos :  Université de Strasbourg, Strasbourg, France
A publication of European Mathematical Society 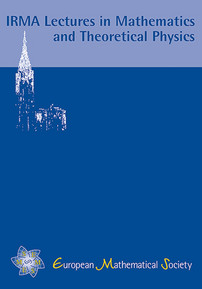 This multi-volume set deals with Teichmüller theory in the broadest sense, namely, as the study of moduli space of geometric structures on surfaces, with methods inspired or adapted from those of classical Teichmüller theory. The aim is to give a complete panorama of this generalized Teichmüller theory and of its applications in various fields of mathematics. The volumes consist of chapters, each of which is dedicated to a specific topic.

The volume has 19 chapters and is divided into four parts:

This handbook is an essential reference for graduate students and researchers interested in Teichmüller theory and its ramifications, in particular for mathematicians working in topology, geometry, algebraic geometry, dynamical systems and complex analysis.

The authors are leading experts in the field.
Readership