Item Successfully Added to Cart
An error was encountered while trying to add the item to the cart. Please try again.
Continue Shopping
Go to Checkout
OK
Please make all selections above before adding to cart
OK
The following link can be shared to navigate to this page. You can select the link to copy or click the 'Copy To Clipboard' button below.
Copy To Clipboard
Successfully Copied!
Lectures on Algebraic Categorification
Volodymyr Mazorchuk :  Uppsala University, Uppsala, Sweden
A publication of European Mathematical Society 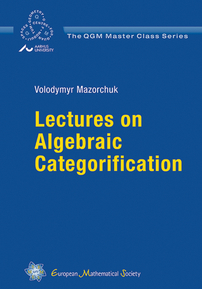 The term “categorification” was introduced by Louis Crane in 1995 and refers to the process of replacing set-theoretic notions by the corresponding category-theoretic analogues.

This text mostly concentrates on algebraical aspects of the theory, presented in the historical perspective, but also contains several topological applications, in particular, an algebraic (or, more precisely, representation-theoretical) approach to categorification. It consists of fifteen sections corresponding to fifteen one-hour lectures given during a Master Class at Aarhus University, Denmark in October 2010. There are some exercises collected at the end of the text and a rather extensive list of references. Video recordings of all (but one) lectures are available from the Master Class website.

The book provides an introductory overview of the subject rather than a fully detailed monograph. The emphasis is made on definitions, examples and formulations of the results. Most proofs are either briefly outlined or omitted. However, complete proofs can be found by tracking references. It is assumed that the reader is familiar with the basics of category theory, representation theory, topology, and Lie algebra.