Item Successfully Added to Cart
An error was encountered while trying to add the item to the cart. Please try again.
Continue Shopping
Go to Checkout
OK
Please make all selections above before adding to cart
OK
The following link can be shared to navigate to this page. You can select the link to copy or click the 'Copy To Clipboard' button below.
Copy To Clipboard
Successfully Copied!
One Semester of Elliptic Curves
Torsten Ekedahl :  University of Stockholm, Stockholm, Sweden
A publication of European Mathematical Society 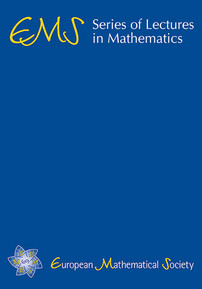 These lecture notes grew out of a one semester introductory course on elliptic curves given to an audience of computer science and mathematics students, and assume only minimal background knowledge. After having covered basic analytic and algebraic aspects, putting special emphasis on explaining the interplay between algebraic and analytic formulas, they go on to some more specialized topics. These include the \(j\)-function from an algebraic and analytic perspective, a discussion of elliptic curves over finite fields, derivation of recursion formulas for the division polynomials, the algebraic structure of the torsion points of an elliptic curve, complex multiplication, and modular forms.

In an effort to motivate basic problems the book starts very slowly but considers some aspects such as modular forms of higher level which are not usually treated. It presents more than 100 exercises and a Mathematica ™ notebook that treats a number of calculations involving elliptic curves.

The book is aimed at students of mathematics with a general interest in elliptic curves but also at students of computer science interested in their cryptographic aspects.