Item Successfully Added to Cart
An error was encountered while trying to add the item to the cart. Please try again.
Continue Shopping
Go to Checkout
OK
Please make all selections above before adding to cart
OK
The following link can be shared to navigate to this page. You can select the link to copy or click the 'Copy To Clipboard' button below.
Copy To Clipboard
Successfully Copied!
Four Faces of Number Theory
Kathrin Bringmann :  University of Koeln, Germany
Yann Bugeaud :  Université de Strasbourg., France
Titus Hilberdink :  University of Reading, United Kingdom
Jürgen Sander :  University of Hildesheim, Germany
A publication of European Mathematical Society 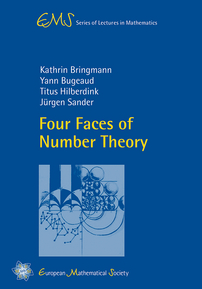 This book arose from courses given at an International Summer School organized by the number theory group of the Department of Mathematics at the University of Würzburg. It consists of four essentially self-contained chapters and presents recent research results highlighting the strong interplay between number theory and other fields of mathematics, such as combinatorics, functional analysis and graph theory. The book is addressed to undergraduate students who wish to discover various aspects of number theory. Remarkably, it demonstrates how easily one can approach frontiers of current research in number theory by elementary and basic analytic methods.

Kathrin Bringmann gives an introduction to the theory of modular forms and, in particular, so-called Mock theta-functions, a topic which had been untouched for decades but has obtained much attention in the last years. Yann Bugeaud is concerned with expansions of algebraic numbers. Here combinatorics on words and transcendence theory are combined to derive new information on the sequence of decimals of algebraic numbers and on their continued fraction expansions. Titus Hilberdink reports on a recent and rather unexpected approach to extreme values of the Riemann zeta-function by use of (multiplicative) Toeplitz matrices and functional analysis. Finally, Jürgen Sander gives an introduction to algebraic graph theory and the impact of number theoretical methods on fundamental questions about the spectra of graphs and the analogue of the Riemann hypothesis.