Item Successfully Added to Cart
An error was encountered while trying to add the item to the cart. Please try again.
Continue Shopping
Go to Checkout
OK
Please make all selections above before adding to cart
OK
The following link can be shared to navigate to this page. You can select the link to copy or click the 'Copy To Clipboard' button below.
Copy To Clipboard
Successfully Copied!
Topics in Mathematical Economics and Game Theory: Essays in Honor of Robert J. Aumann
Edited by: Myrna H. Wooders :  University of Toronto, Toronto, ON, Canada
A co-publication of the AMS and Fields Institute 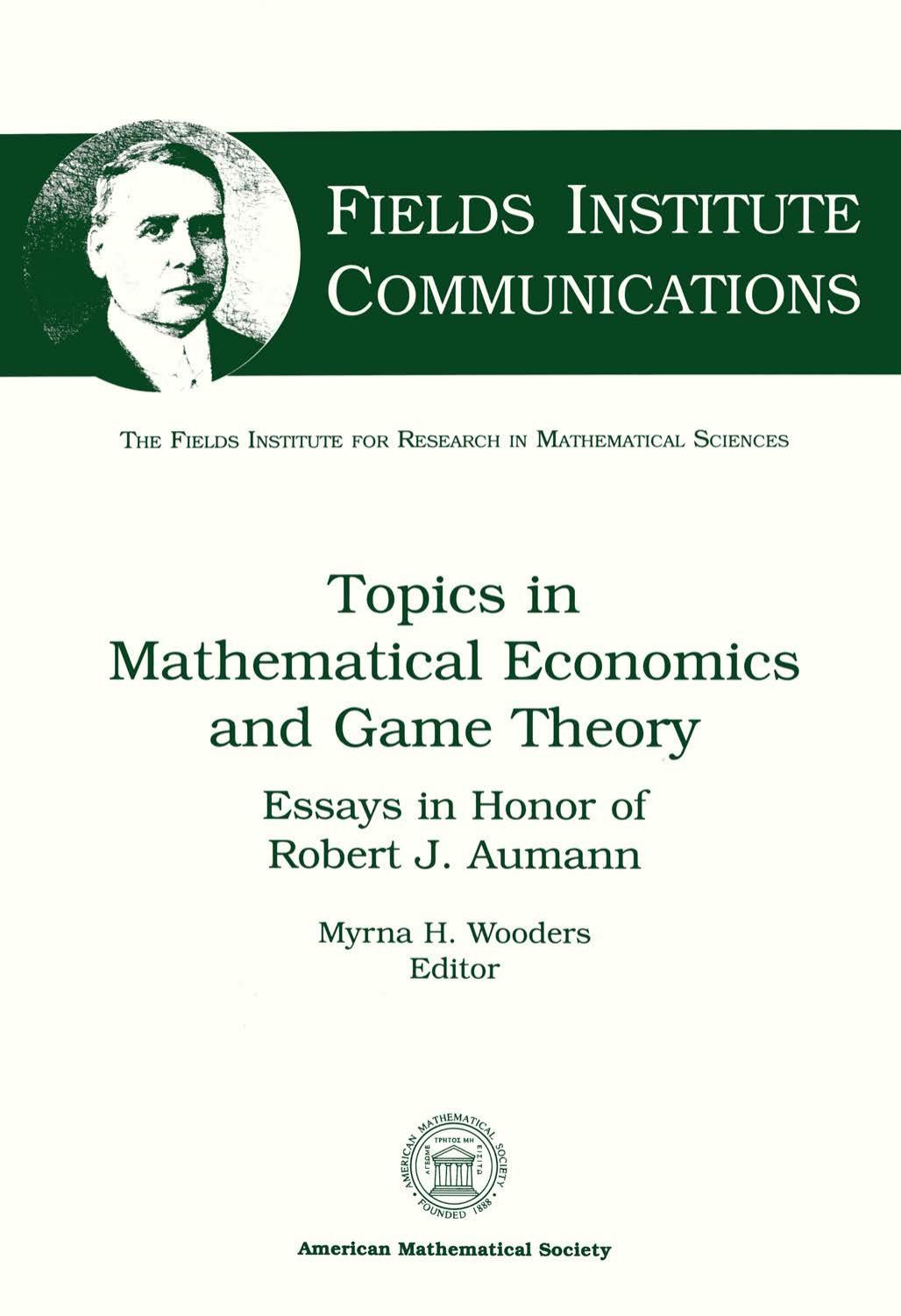 Click above image for expanded view
Topics in Mathematical Economics and Game Theory: Essays in Honor of Robert J. Aumann
Edited by: Myrna H. Wooders :  University of Toronto, Toronto, ON, Canada
A co-publication of the AMS and Fields Institute

Available Formats:
Add to cart
Bundle Print and Electronic Formats and Save!
This product is available for purchase as a bundle. Purchasing as a bundle enables you to save on the electronic version.
List Price: $165.00
MAA Member Price: $148.50
AMS Member Price: $132.00
Add bundle to cart
Fields Institute Communications
Volume: 23; 1999
MSC: Primary 91;

Since the publication of Theory of Games and Economic Behavior by von Neumann and Morgenstern, the concept of games has played an increasing role in economics. It also plays a role of growing importance in other sciences, including biology, political science, and psychology. Many scientists have made seminal advances and continue to be leaders in the field, including Harsanyi, Shapley, Shubik, and Selten. Professor Robert Aumann, in addition to his important contributions to game theory and economics, made a number of significant contributions to mathematics.

This volume provides a collection of essays in mathematical economics and game theory, including cutting-edge research on noncooperative game theory and its foundations, bargaining theory, and general equilibrium theory. Also included is a reprint of Aumann's classic paper, “Acceptable Points in General Cooperative \(n\)-Person Games” and of the oft-cited, yet hard to find, paper by Maschler, “The Worth of a Cooperative Enterprise to Each Member”. This book illustrates the wide range of applications of mathematics to economics, game theory, and social choice.

The volume is dedicated to Professor Robert J. Aumann, Hebrew University, Jerusalem, Israel, for his contributions in mathematics and social sciences.