Item Successfully Added to Cart
An error was encountered while trying to add the item to the cart. Please try again.
Continue Shopping
Go to Checkout
OK
Please make all selections above before adding to cart
OK
The following link can be shared to navigate to this page. You can select the link to copy or click the 'Copy To Clipboard' button below.
Copy To Clipboard
Successfully Copied!
What’s Happening in the Mathematical Sciences, Volume 6
Dana Mackenzie
Barry Cipra

The AMS series What's Happening in the Mathematical Sciences distills the amazingly rich brew of current research in mathematics down to a few choice samples. This volume leads off with an update on the Poincaré Conjecture, a hundred-year-old problem that has apparently been solved by Grigory Perelman of St. Petersburg, Russia. So what did topologists do when the oldest and most famous problem about closed manifolds was vanquished? As the second chapter describes, they confronted a suite of problems concerning the “ends” of open manifolds… and solved those, too.

Not to be outdone, number theorists accomplished several unexpected feats in the first five years of the new century, from computing a trillion digits of pi to finding arbitrarily long equally-spaced sequences of prime numbers. Undergraduates made key discoveries, as explained in the chapters on Venn diagrams and primality testing. In applied mathematics, the Navier-Stokes equations of fluid mechanics continued to stir up interest. One team proved new theorems about the long-term evolution of vortices, while others explored the surprising ways that insects use vortices to move around. The random jittering of Brownian motion became a little less mysterious. Finally, an old and trusted algorithm of computer science had its trustworthiness explained in a novel way.

Barry Cipra explains these new developments in his wry and witty style, familiar to readers of Volumes 1–5, and is joined in this volume by Dana Mackenzie. Volume 6 of What's Happening will convey to all readers—from mathematical novices to experts—the beauty and wonder that is mathematics.

Click here to listen to interviews with authors Barry Cipra and Dana Mackenzie. 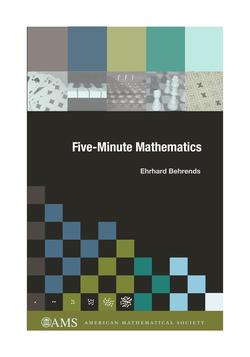