Item Successfully Added to Cart
An error was encountered while trying to add the item to the cart. Please try again.
Continue Shopping
Go to Checkout
OK
Please make all selections above before adding to cart
OK
The following link can be shared to navigate to this page. You can select the link to copy or click the 'Copy To Clipboard' button below.
Copy To Clipboard
Successfully Copied!
Euclid’s Phaenomena: A Translation and Study of a Hellenistic Treatise in Spherical Astronomy
J. L. Berggren :  Simon Fraser University, Burnaby, BC, Canada
R. S. D. Thomas :  University of Manitoba, Winnipeg, MB, Canada
A co-publication of the AMS and London Mathematical Society 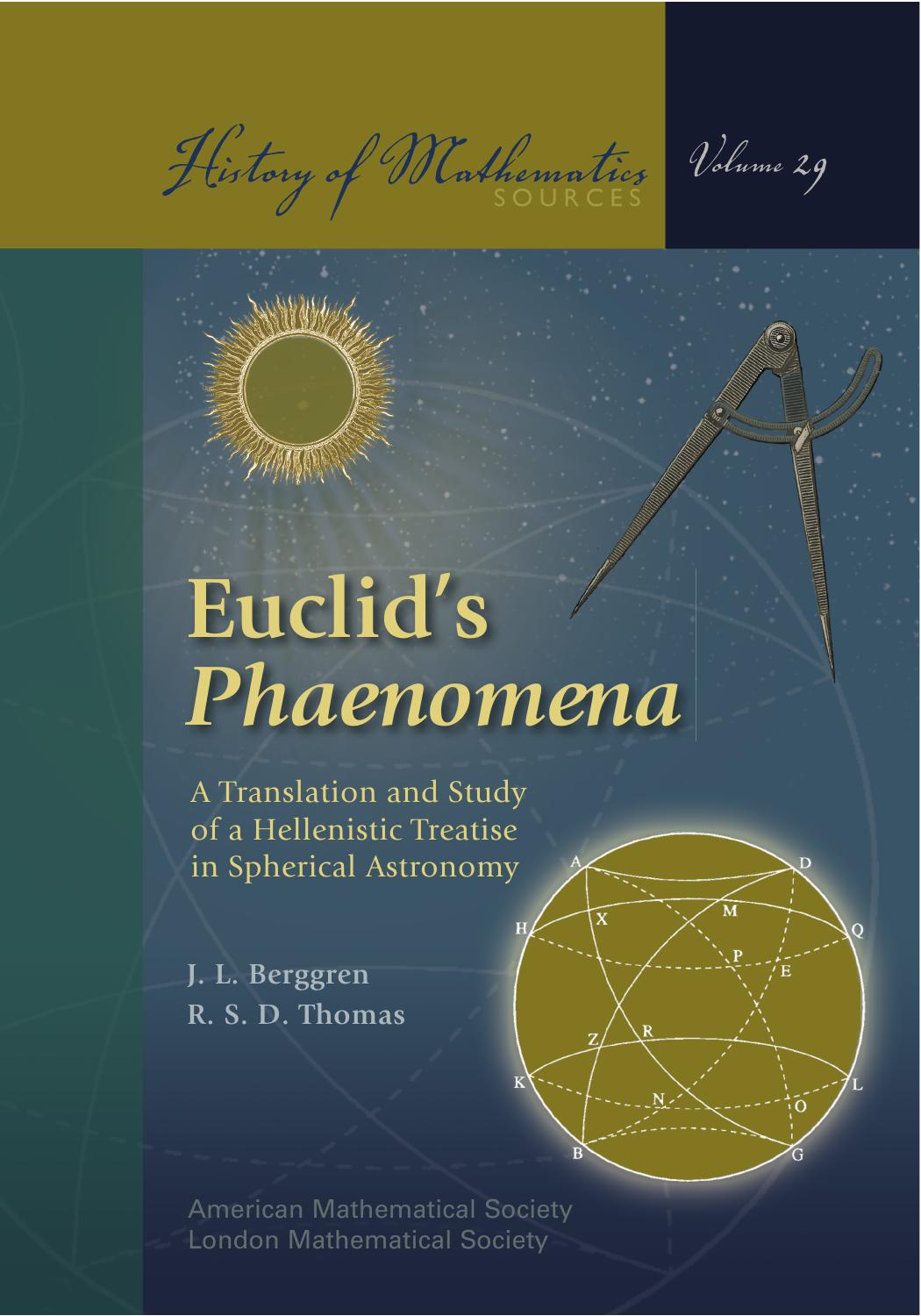 Click above image for expanded view
Euclid’s Phaenomena: A Translation and Study of a Hellenistic Treatise in Spherical Astronomy
J. L. Berggren :  Simon Fraser University, Burnaby, BC, Canada
R. S. D. Thomas :  University of Manitoba, Winnipeg, MB, Canada
A co-publication of the AMS and London Mathematical Society
Available Formats:
Add to cart
Bundle Print and Electronic Formats and Save!
This product is available for purchase as a bundle. Purchasing as a bundle enables you to save on the electronic version.
List Price: $51.00
MAA Member Price: $45.90
AMS Member Price: $40.80
Add bundle to cart
History of Mathematics
History of Mathematics Source Series
Volume: 29; 2006
MSC: Primary 01;

The book contains a translation and study of Euclid's Phaenomena, a work which once formed part of the mathematical training of astronomers from Central Asia to Western Europe. Included is an introduction that sets Euclid's geometry of the celestial sphere, and its application to the astronomy of his day, into its historical context for readers not already familiar with it. So no knowledge of astronomy or advanced mathematics is necessary for an understanding of the work. The book shows mathematical astronomy shortly before the invention of trigonometry, which allowed the calculation of exact results and the subsequent composition of Ptolemy's Almagest.

The Phaenomena itself begins with an introduction (possibly not by Euclid) followed by eighteen propositions set out in geometrical style about how arcs of the zodiacal circle move across the sky. The astronomical application is to the small arc of that circle occupied by the Sun, but the Sun is not mentioned. This work and the (roughly) contemporaneous treatises of Autolycus and Aristarchos form a corpus of the oldest extant works on mathematical astronomy. Together with Euclid's Optics one has the beginnings of the history of science as an application of mathematics.

This volume is one of an informal sequence of works within the History of Mathematics series. Volumes in this subset, “Sources”, are classical mathematical works that served as cornerstones for modern mathematical thought.

Undergraduates, graduate students, and research mathematicians interested in the history of mathematics and astronomical applications of geometry.