Item Successfully Added to Cart
An error was encountered while trying to add the item to the cart. Please try again.
Continue Shopping
Go to Checkout
OK
Please make all selections above before adding to cart
OK
The following link can be shared to navigate to this page. You can select the link to copy or click the 'Copy To Clipboard' button below.
Copy To Clipboard
Successfully Copied!
Elliptic Partial Differential Operators and Symplectic Algebra
W. N. Everitt :  University of Birmingham, Birmingham, England
L. Markus :  University of Minnesota, Minneapolis, MN 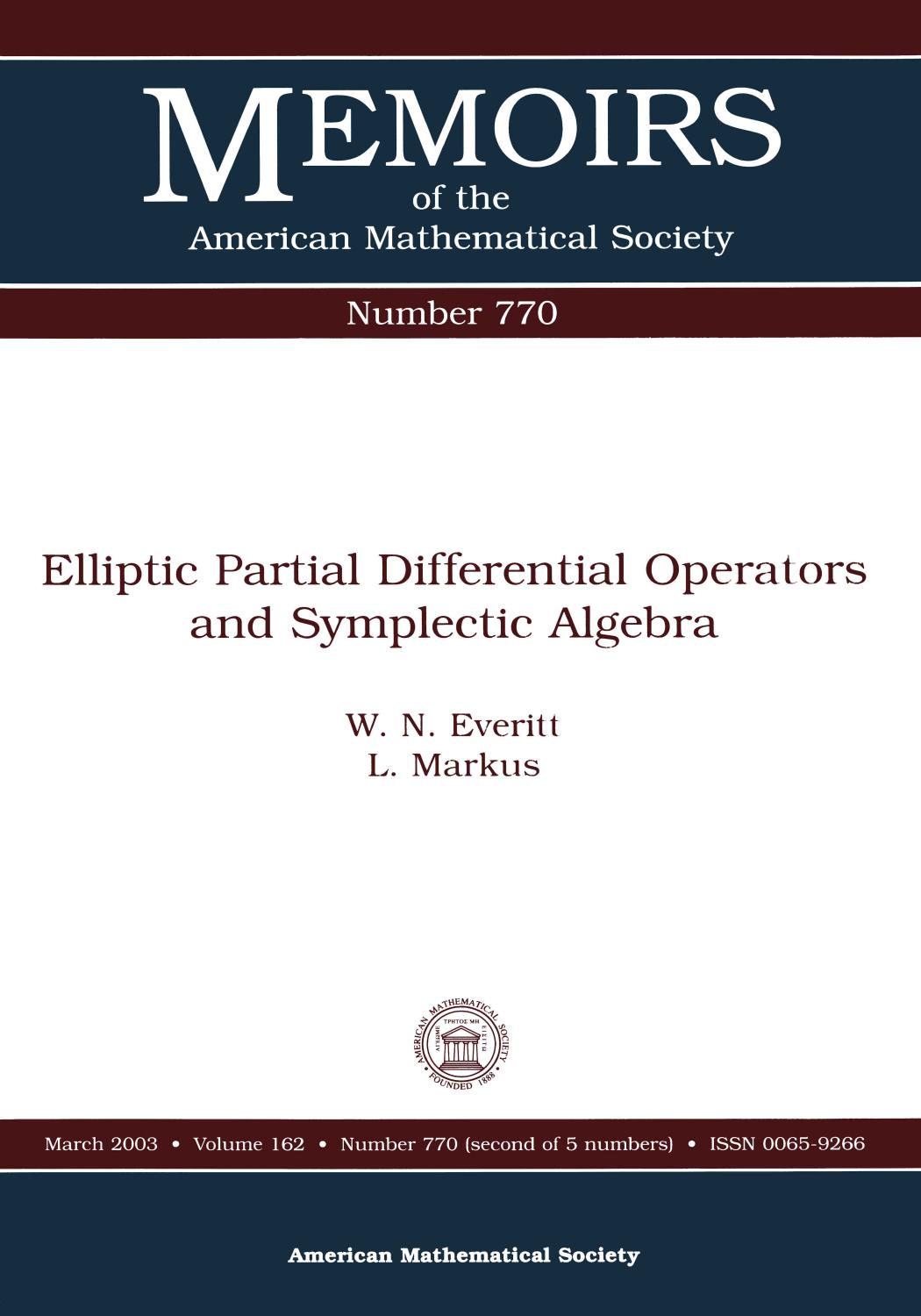 This investigation introduces a new description and classification for the set of all self-adjoint operators (not just those defined by differential boundary conditions) which are generated by a linear elliptic partial differential expression \[A(\mathbf{x},D)=\sum_{0\,\leq\,\left| s\right| \,\leq\,2m}a_{s} (\mathbf{x})D^{s}\text{ for all }\mathbf{x}\in\Omega\] in a region \(\Omega\), with compact closure \(\overline{\Omega}\) and \(C^{\infty }\)-smooth boundary \(\partial\Omega\), in Euclidean space \(\mathbb{E}^{r}\) \((r\geq2).\) The order \(2m\geq2\) and the spatial dimension \(r\geq2\) are arbitrary. We assume that the coefficients \(a_{s}\in C^{\infty}(\overline {\Omega})\) are complex-valued, except real for the highest order terms (where \(\left| s\right| =2m\)) which satisfy the uniform ellipticity condition in \(\overline{\Omega}\). In addition, \(A(\cdot,D)\) is Lagrange symmetric so that the corresponding linear operator \(A\), on its classical domain \(D(A):=C_{0}^{\infty}(\Omega)\subset L_{2}(\Omega)\), is symmetric; for example the familiar Laplacian \(\Delta\) and the higher order polyharmonic operators \(\Delta^{m}\).

Through the methods of complex symplectic algebra, which the authors have previously developed for ordinary differential operators, the Stone-von Neumann theory of symmetric linear operators in Hilbert space is reformulated and adapted to the determination of all self-adjoint extensions of \(A\) on \(D(A)\), by means of an abstract generalization of the Glazman-Krein-Naimark (GKN) Theorem. In particular the authors construct a natural bijective correspondence between the set \(\{T\}\) of all such self-adjoint operators on domains \(D(T)\supset D(A)\), and the set \(\{\mathsf{L}\}\) of all complete Lagrangian subspaces of the boundary complex symplectic space \(\mathsf{S}=D(T_{1})\,/\,D(T_{0})\), where \(T_{0}\) on \(D(T_{0})\) and \(T_{1}\) on \(D(T_{1})\) are the minimal and maximal operators, respectively, determined by \(A\) on \(D(A)\subset L_{2}(\Omega)\). In the case of the elliptic partial differential operator \(A\), we verify \(D(T_{0})=\overset{\text{o}}{W}{}^{2m}(\Omega)\) and provide a novel definition and structural analysis for \(D(T_{1})=\overset{A}{W}{}^{2m}(\Omega)\), which extends the GKN-theory from ordinary differential operators to a certain class of elliptic partial differential operators. Thus the boundary complex symplectic space \(\mathsf{S}= \overset{A}{W}{}^{2m}(\Omega)\,/\,\overset{\text{o}}{W}{}^{2m}(\Omega)\) effects a classification of all self-adjoint extensions of \(A\) on \(D(A)\), including those operators that are not specified by differential boundary conditions, but instead by global (i.e. non-local) generalized boundary conditions. The scope of the theory is illustrated by several familiar, and other quite unusual, self-adjoint operators described in special examples.

An Appendix is attached to present the basic definitions and concepts of differential topology and functional analysis on differentiable manifolds. In this Appendix care is taken to list and explain all special mathematical terms and symbols - in particular, the notations for Sobolev Hilbert spaces and the appropriate trace theorems.

An Acknowledgment and subject Index complete this Memoir.