Item Successfully Added to Cart
An error was encountered while trying to add the item to the cart. Please try again.
Continue Shopping
Go to Checkout
OK
Please make all selections above before adding to cart
OK
The following link can be shared to navigate to this page. You can select the link to copy or click the 'Copy To Clipboard' button below.
Copy To Clipboard
Successfully Copied!
Integrable Hamiltonian Systems on Complex Lie Groups
V. Jurdjevic :  University of Toronto, Toronto, ON, Canada 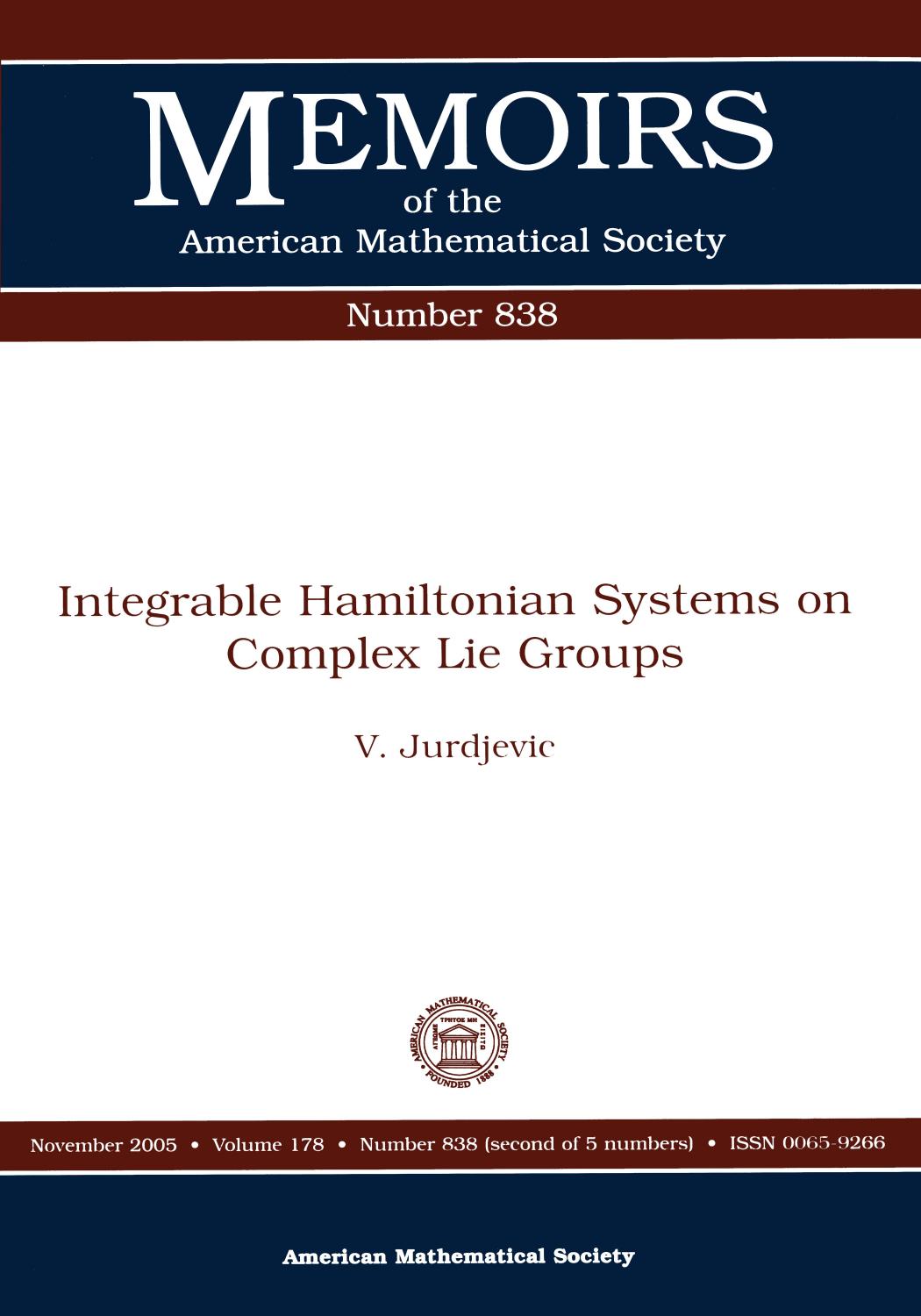 This paper is a study of the elastic problems on simply connected manifolds \(M_n\) whose orthonormal frame bundle is a Lie group \(G\). Such manifolds, called the space forms in the literature on differential geometry, are classified and consist of the Euclidean spaces \(\mathbb{E}^n\), the hyperboloids \(\mathbb{H}^n\), and the spheres \(S^n\), with the corresponding orthonormal frame bundles equal to the Euclidean group of motions \(\mathbb{E}^n\rtimes SO_n(\mathbb{R})\), the rotation group \(SO_{n+1}(\mathbb{R})\), and the Lorentz group \(SO(1,n)\).

These variational problems fall in two classes, the Euler-Griffiths problems and the problems of Kirchhoff. The Euler-Griffiths elastic problems consist of minimizing the integral \[\tfrac{1}{2}\int_0^T\kappa^2(s)\,ds\] with \(\kappa (t)\) equal to the geodesic curvature of a curve \(x(t)\) in the base manifold \(M_n\) with \(T\) equal to the Riemannian length of \(x\). The curves \(x(t)\) in this variational problem are subject to certain initial and terminal boundary conditions. The elastic problems of Kirchhoff is more general than the problems of Euler-Griffiths in the sense that the quadratic form \((\, , \,)\) that defines the functional to be minimized may be independent of the geometric invariants of the projected curves in the base manifold. It is only on two dimensional manifolds that these two problems coincide in which case the solutions curves can be viewed as the non-Euclidean versions of L. Euler elasticae introduced in 174.

Each elastic problem defines the appropriate left-invariant Hamiltonian \(\mathcal{H}\) on the dual \(\mathfrak{g}^*\) of the Lie algebra of \(G\) through the Maximum Principle of optimal control. The integral curves of the corresponding Hamiltonian vector field \(\vec{\mathcal{H}}\) are called the extremal curves.

The paper is divided into two parts. The first part of the paper synthesizes ideas from optimal control theory, adapted to variational problems on the principal bundles of Riemannian spaces, and the symplectic geometry of the Lie algebra \(\mathfrak{g},\) of \(G\), or more precisely, the symplectic structure of the cotangent bundle \(T^*G\) of \(G\).

The second part of the paper is devoted to the solutions of the complexified Hamiltonian equations induced by the elastic problems. The paper contains a detailed discussion of the algebraic preliminaries leading up to \(so_n(\mathbb{C})\), a natural complex setting for the study of the left invariant Hamiltonians on real Lie groups \(G\) for which \(\mathfrak{g}\) is a real form for \(so_n(\mathbb{C})\). It is shown that the Euler-Griffiths problem is completely integrable in any dimension with the solutions the holomorphic extensions of the ones obtained by earlier P. Griffiths. The solutions of the elastic problems of Kirchhoff are presented in complete generality on \(SO_3(\mathbb{C})\) and there is a classification of the integrable cases on \(so_4(\mathbb{C})\) based on the criteria of Kowalewski-Lyapunov in their study of the mechanical tops. Remarkably, the analysis yields essentially only two integrables cases analogous to the top of Lagrange and the top of Kowalewski. The paper ends with the solutions of the integrable complex Hamiltonian systems on the \(SL_2(\mathbb{C})\times SL_2(\mathbb{C})\), the universal cover of \(SO_4(\mathbb{C})\).