Item Successfully Added to Cart
An error was encountered while trying to add the item to the cart. Please try again.
Continue Shopping
Go to Checkout
OK
Please make all selections above before adding to cart
OK
The following link can be shared to navigate to this page. You can select the link to copy or click the 'Copy To Clipboard' button below.
Copy To Clipboard
Successfully Copied!
Tangential Boundary Stabilization of Navier-Stokes Equations
Viorel Barbu :  University of Virginia, Charlottesville, VA
Irena Lasiecka :  University of Virginia, Charlottesville, VA
Roberto Triggiani 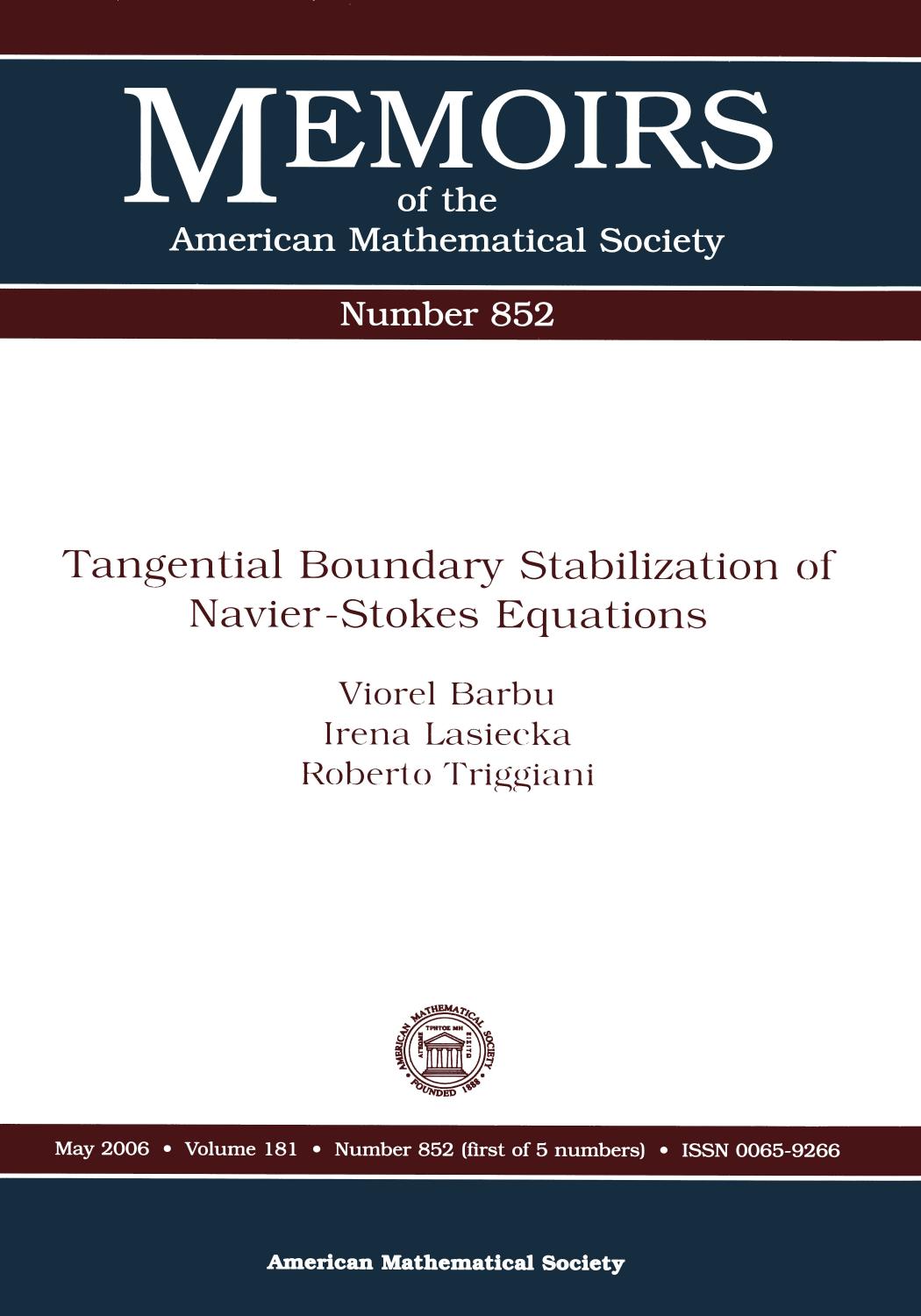 The steady-state solutions to Navier-Stokes equations on a bounded domain \(\Omega \subset R^d\), \(d = 2,3\), are locally exponentially stabilizable by a boundary closed-loop feedback controller, acting tangentially on the boundary \(\partial \Omega\), in the Dirichlet boundary conditions. The greatest challenge arises from a combination between the control as acting on the boundary and the dimensionality \(d=3\). If \(d=3\), the non-linearity imposes and dictates the requirement that stabilization must occur in the space \((H^{\tfrac{3}{2}+\epsilon}(\Omega))^3\), \(\epsilon > 0\), a high topological level. A first implication thereof is that, due to compatibility conditions that now come into play, for \(d=3\), the boundary feedback stabilizing controller must be infinite dimensional. Moreover, it generally acts on the entire boundary \(\partial \Omega\). Instead, for \(d=2\), where the topological level for stabilization is \((H^{\tfrac{3}{2}-\epsilon}(\Omega))^2\), the boundary feedback stabilizing controller can be chosen to act on an arbitrarily small portion of the boundary. Moreover, still for \(d=2\), it may even be finite dimensional, and this occurs if the linearized operator is diagonalizable over its finite-dimensional unstable subspace.

In order to inject dissipation as to force local exponential stabilization of the steady-state solutions, an Optimal Control Problem (OCP) with a quadratic cost functional over an infinite time-horizon is introduced for the linearized N-S equations. As a result, the same Riccati-based, optimal boundary feedback controller which is obtained in the linearized OCP is then selected and implemented also on the full N-S system. For \(d=3\), the OCP falls definitely outside the boundaries of established optimal control theory for parabolic systems with boundary controls, in that the combined index of unboundedness—between the unboundedness of the boundary control operator and the unboundedness of the penalization or observation operator—is strictly larger than \(\tfrac{3}{2}\), as expressed in terms of fractional powers of the free-dynamics operator. In contrast, established (and rich) optimal control theory [L-T.2] of boundary control parabolic problems and corresponding algebraic Riccati theory requires a combined index of unboundedness strictly less than 1. An additional preliminary serious difficulty to overcome lies at the outset of the program, in establishing that the present highly non-standard OCP—with the aforementioned high level of unboundedness in control and observation operators and subject, moreover, to the additional constraint that the controllers be pointwise tangential—be non-empty; that is, it satisfies the so-called Finite Cost Condition [L-T.2].