Item Successfully Added to Cart
An error was encountered while trying to add the item to the cart. Please try again.
Continue Shopping
Go to Checkout
OK
Please make all selections above before adding to cart
OK
The following link can be shared to navigate to this page. You can select the link to copy or click the 'Copy To Clipboard' button below.
Copy To Clipboard
Successfully Copied!
Distribution of Values of Holomorphic Mappings
B. V. Shabat 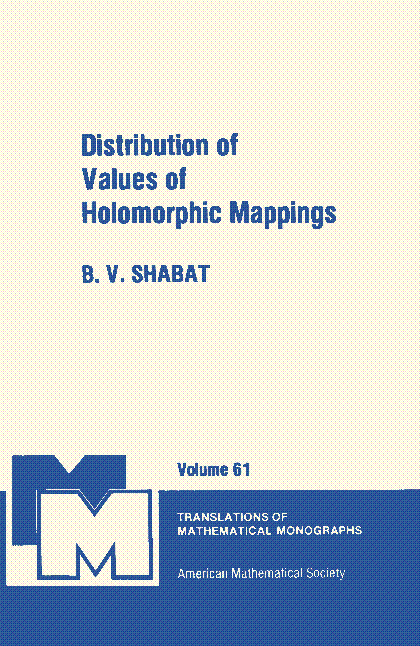 A vast literature has grown up around the value distribution theory of meromorphic functions, synthesized by Rolf Nevanlinna in the 1920s and singled out by Hermann Weyl as one of the greatest mathematical achievements of this century. The multidimensional aspect, involving the distribution of inverse images of analytic sets under holomorphic mappings of complex manifolds, has not been fully treated in the literature. This volume thus provides a valuable introduction to multivariate value distribution theory and a survey of some of its results, rich in relations to both algebraic and differential geometry and surely one of the most important branches of the modern geometric theory of functions of a complex variable.

Since the book begins with preparatory material from the contemporary geometric theory of functions, only a familiarity with the elements of multidimensional complex analysis is necessary background to understand the topic. After proving the two main theorems of value distribution theory, the author goes on to investigate further the theory of holomorphic curves and to provide generalizations and applications of the main theorems, focusing chiefly on the work of Soviet mathematicians.