Item Successfully Added to Cart
An error was encountered while trying to add the item to the cart. Please try again.
Continue Shopping
Go to Checkout
OK
Please make all selections above before adding to cart
OK
The following link can be shared to navigate to this page. You can select the link to copy or click the 'Copy To Clipboard' button below.
Copy To Clipboard
Successfully Copied!
The Mathematics of Networks
Edited by: Stefan A. Burr 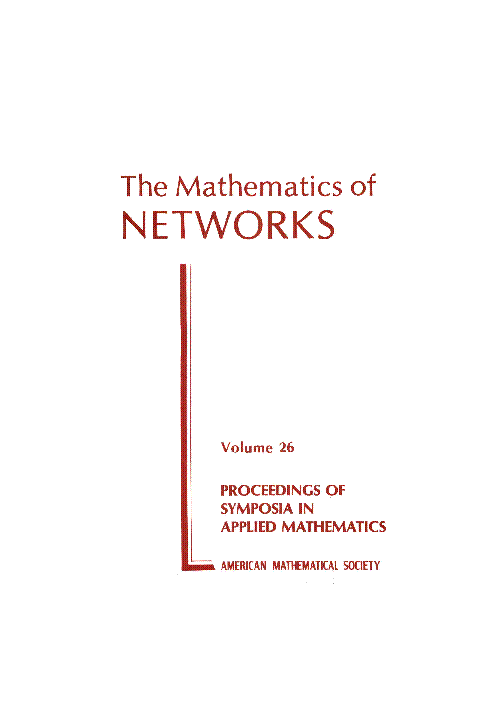 Click above image for expanded view
The Mathematics of Networks
Edited by: Stefan A. Burr

Available Formats:
Add to cart
Bundle Print and Electronic Formats and Save!
This product is available for purchase as a bundle. Purchasing as a bundle enables you to save on the electronic version.
Add bundle to cart
Proceedings of Symposia in Applied Mathematics
Volume: 26; 1982; 142 pp
MSC: Primary 90;

The theory of networks is a very lively one, both in terms of developments in the theory itself and of the variety of its applications. This book, based on the 1981 AMS Short Course on the Mathematics of Networks, introduces most of the basic ideas of network theory and develops some of these ideas considerably. A number of more specialized topics are introduced, including areas of active research and a wide variety of applications.

Frank Boesch gives the basic definitions in the mathematics of networks and in the closely-related topic of graph theory. He discusses two of the most fundamental network problems — the shortest path problem and the minimum spanning tree problem as well as some of their variants. Boesch also gives an interesting presentation in the area of network reliability. Frances Yao considers maximum flows in networks, the problem most often thought of in connection with the mathematics of networks. Richard Karp gives an account of the computational complexity of network problems. Using the case study method, Shen Lin demonstrates the effective use of heuristic algorithms in network design. Four applications of the mathematics of networks are presented by Daniel Kleitman. These include: the design of irrigation systems, the theory of electrical networks, the scheduling of delivery trucks, and the physics of ice. Finally, Nicholas Pippenger presents a chapter on telephone switching networks, an area of network theory that leads to difficult mathematics drawn from such apparently unrelated fields as harmonic analysis.