Item Successfully Added to Cart
An error was encountered while trying to add the item to the cart. Please try again.
Continue Shopping
Go to Checkout
OK
Please make all selections above before adding to cart
OK
The following link can be shared to navigate to this page. You can select the link to copy or click the 'Copy To Clipboard' button below.
Copy To Clipboard
Successfully Copied!
Computer Communications
Edited by: B. Gopinath 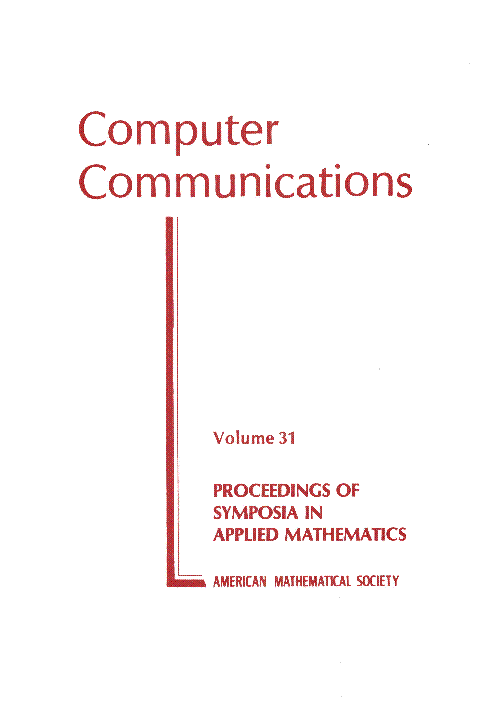 Click above image for expanded view
Computer Communications
Edited by: B. Gopinath

Available Formats:
Add to cart
Bundle Print and Electronic Formats and Save!
This product is available for purchase as a bundle. Purchasing as a bundle enables you to save on the electronic version.
List Price: $66.00
MAA Member Price: $59.40
AMS Member Price: $52.80
Add bundle to cart
Proceedings of Symposia in Applied Mathematics
Volume: 31; 1985
MSC: Primary 68;

This is the proceedings of the 1983 AMS Short Course given at Denver, Colorado.

Computer communications is characterized by rapid technological advances presenting problems of a theoretical nature that are often very difficult to solve. They range from those that arise on a single chip, where communication among thousands of elements on a chip is influenced by electrical properties, to those that arise when human beings communicate with databases where the logical aspects of communications play a more important role. A variety of mathematical methods is needed to attempt to solve such problems; they vary from partial differential equations to temporal or modal logic.

The article on “Diffusion Approximation” is probably one of the best reviews of this field. The book is unique in having contributors from a variety of different fields of computer communications. All of the articles are of high research value and are self-contained.