Item Successfully Added to Cart
An error was encountered while trying to add the item to the cart. Please try again.
Continue Shopping
Go to Checkout
OK
Please make all selections above before adding to cart
OK
The following link can be shared to navigate to this page. You can select the link to copy or click the 'Copy To Clipboard' button below.
Copy To Clipboard
Successfully Copied!
Evolutionary Game Dynamics
Edited by: Karl Sigmund :  University of Vienna, Vienna, Austria 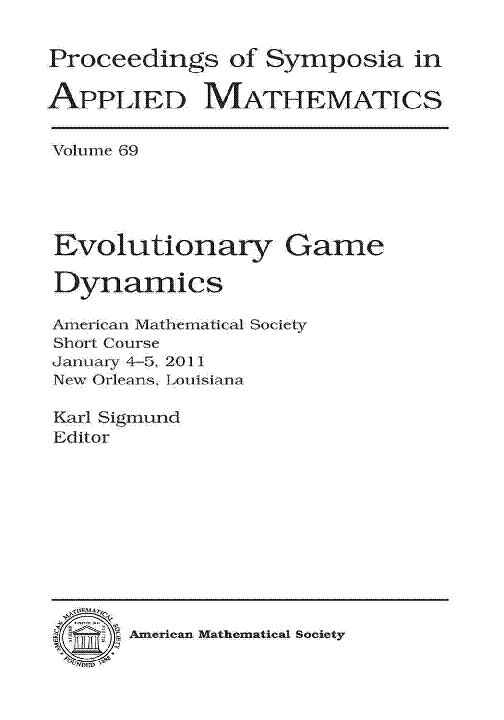 Available Formats:
Add to cart
Bundle Print and Electronic Formats and Save!
This product is available for purchase as a bundle. Purchasing as a bundle enables you to save on the electronic version.
Add bundle to cart
Proceedings of Symposia in Applied Mathematics
Volume: 69; 2011; 171 pp
MSC: Primary 91;

This volume is based on lectures delivered at the 2011 AMS Short Course on Evolutionary Game Dynamics, held January 4–5, 2011 in New Orleans, Louisiana.

Evolutionary game theory studies basic types of social interactions in populations of players. It combines the strategic viewpoint of classical game theory (independent rational players trying to outguess each other) with population dynamics (successful strategies increase their frequencies). A substantial part of the appeal of evolutionary game theory comes from its highly diverse applications such as social dilemmas, the evolution of language, or mating behaviour in animals. Moreover, its methods are becoming increasingly popular in computer science, engineering, and control theory. They help to design and control multi-agent systems, often with a large number of agents (for instance, when routing drivers over highway networks or data packets over the Internet).

While these fields have traditionally used a top down approach by directly controlling the behaviour of each agent in the system, attention has recently turned to an indirect approach allowing the agents to function independently while providing incentives that lead them to behave in the desired way. Instead of the traditional assumption of equilibrium behaviour, researchers opt increasingly for the evolutionary paradigm and consider the dynamics of behaviour in populations of agents employing simple, myopic decision rules.