Item Successfully Added to Cart
An error was encountered while trying to add the item to the cart. Please try again.
Continue Shopping
Go to Checkout
OK
Please make all selections above before adding to cart
OK
The following link can be shared to navigate to this page. You can select the link to copy or click the 'Copy To Clipboard' button below.
Copy To Clipboard
Successfully Copied!
The Mathematical Heritage of Henri Poincaré
Edited by: Felix E. Browder 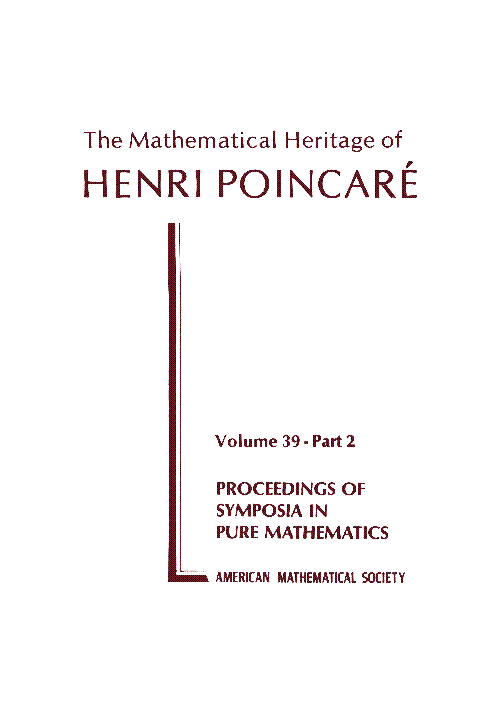 Click above image for expanded view
The Mathematical Heritage of Henri Poincaré
Edited by: Felix E. Browder
Available Formats:
Add to cart
Bundle Print and Electronic Formats and Save!
This product is available for purchase as a bundle. Purchasing as a bundle enables you to save on the electronic version.
Add bundle to cart
Proceedings of Symposia in Pure Mathematics
Volume: 39; 1983; 470 pp
MSC: Primary 00; Secondary 01;

On April 7-10, 1980, the American Mathematical Society sponsored a Symposium on the Mathematical Heritage of Henri Poincari, held at Indiana University, Bloomington, Indiana. This volume presents the written versions of all but three of the invited talks presented at this Symposium (those by W. Browder, A. Jaffe, and J. Mather were not written up for publication). In addition, it contains two papers by invited speakers who were not able to attend, S. S. Chern and L. Nirenberg.

If one traces the influence of Poincari through the major mathematical figures of the early and midtwentieth century, it is through American mathematicians as well as French that this influence flows, through G. D. Birkhoff, Solomon Lefschetz, and Marston Morse. This continuing tradition represents one of the major strands of American as well as world mathematics, and it is as a testimony to this tradition as an opening to the future creativity of mathematics that this volume is dedicated.