Item Successfully Added to Cart
An error was encountered while trying to add the item to the cart. Please try again.
Continue Shopping
Go to Checkout
OK
Please make all selections above before adding to cart
OK
The following link can be shared to navigate to this page. You can select the link to copy or click the 'Copy To Clipboard' button below.
Copy To Clipboard
Successfully Copied!
Geometric Measure Theory and the Calculus of Variations
Edited by: William K. Allard
Frederick J. Almgren, Jr. 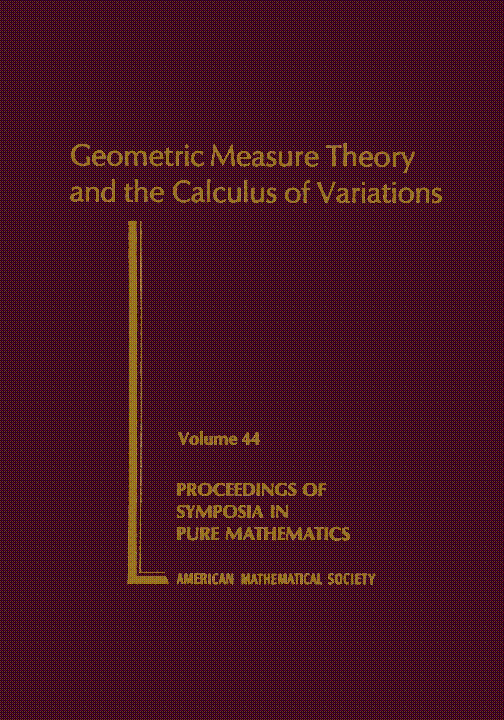 Click above image for expanded view
Geometric Measure Theory and the Calculus of Variations
Edited by: William K. Allard
Frederick J. Almgren, Jr.
Available Formats:
Add to cart
Bundle Print and Electronic Formats and Save!
This product is available for purchase as a bundle. Purchasing as a bundle enables you to save on the electronic version.
Add bundle to cart
Proceedings of Symposia in Pure Mathematics
Volume: 44; 1986; 464 pp
MSC: Primary 00; Secondary 28; 49; 53;

These twenty-six papers survey a cross section of current work in modern geometric measure theory and its applications in the calculus of variations. Presently the field consists of a jumble of new ideas, techniques and intuitive hunches; an exchange of information has been hindered, however, by the characteristic length and complexity of formal research papers in higher-dimensional geometric analysis. This volume provides an easier access to the material, including introductions and summaries of many of the authors' much longer works and a section containing 80 open problems in the field. The papers are aimed at analysts and geometers who may use geometric measure-theoretic techniques, and they require a mathematical sophistication at the level of a second year graduate student.

The papers included were presented at the 1984 AMS Summer Research Institute held at Humboldt State University. A major theme of this institute was the introduction and application of multiple-valued function techniques as a basic new tool in geometric analysis, highlighted by Almgren's fundamental paper Deformations and multiple-valued functions. Major new results discussed at the conference included the following: Allard's integrality and regularity theorems for surfaces stationary with respect to general elliptic integrands; Scheffer's first example of a singular solution to the Navier-Stokes equations for a fluid flow with opposing force; and Hutchinson's new definition of the second fundamental form of a general varifold.