Item Successfully Added to Cart
An error was encountered while trying to add the item to the cart. Please try again.
Continue Shopping
Go to Checkout
OK
Please make all selections above before adding to cart
OK
The following link can be shared to navigate to this page. You can select the link to copy or click the 'Copy To Clipboard' button below.
Copy To Clipboard
Successfully Copied!
The Bieberbach Conjecture: Proceedings of the Symposium on the Occasion of the Proof
Edited by: Albert Baernstein
David Drasin
Peter Duren
Albert Marden 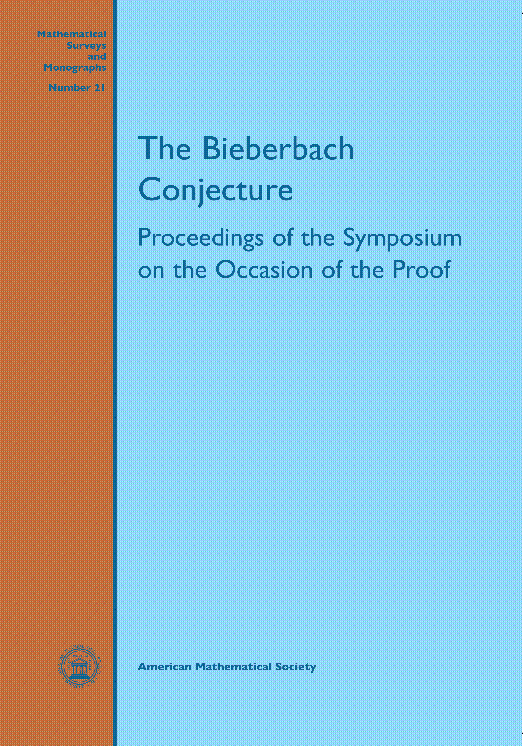 Click above image for expanded view
The Bieberbach Conjecture: Proceedings of the Symposium on the Occasion of the Proof
Edited by: Albert Baernstein
David Drasin
Peter Duren
Albert Marden
Available Formats:
Add to cart
Bundle Print and Electronic Formats and Save!
This product is available for purchase as a bundle. Purchasing as a bundle enables you to save on the electronic version.
Add bundle to cart
Mathematical Surveys and Monographs
Volume: 21; 1986; 218 pp
MSC: Primary 30;

For over 70 years, the Bieberbach conjecture has intrigued the mathematical world. Many students of mathematics, who have had a first course in function theory, have tried their hand at a proof. But many have invested fruitless years of carefully manipulating inequalities in an attempt to establish the correct bound.

In 1977, Louis de Branges of Purdue University took up the challenge of this famous unsolved problem, but in his case the outcome was different. He will be recognized as the mathematician who proved Bieberbach's conjecture. And more importantly, his method came from totally unexpected sources: operator theory and special functions.

This book, based on the Symposium on the Occasion of the Proof, tells the story behind this fascinating proof and offers insight into the nature of the conjecture, its history and its proof. A special and unusual feature of the book is the enlightened personal accounts of the people involved in the exciting events surrounding the proof. Especially attractive are the photographs of mathematicians who have made significant contributions to univalent functions, the area of complex analysis which provides the setting for the Bieberbach conjecture.

Research mathematicians, especially analysts, are sure to enjoy the articles in this volume. Most articles require only a basic knowledge of real and complex analysis. The survey articles are accessible to non-specialists, and the personal accounts of all who have played a part in this important discovery will fascinate any reader.

“The remarks by de Branges himself about the discovery of his proof should be read by all young mathematicians. He describes the difficulty he had in convincing the experts in the field that a mathematician, whose work was considered to lie in an entirely different area, had actually proved a problem of such long standing. When a mathematician is sure that he has the solution of a problem, he must persist until he convinces others or is actually proved wrong.” (Prepublication comments by James A. Hummel, The University of Maryland, College Park.)