Item Successfully Added to Cart
An error was encountered while trying to add the item to the cart. Please try again.
Continue Shopping
Go to Checkout
OK
Please make all selections above before adding to cart
OK
The following link can be shared to navigate to this page. You can select the link to copy or click the 'Copy To Clipboard' button below.
Copy To Clipboard
Successfully Copied!
Introduction to various aspects of degree theory in Banach spaces
E. H. Rothe 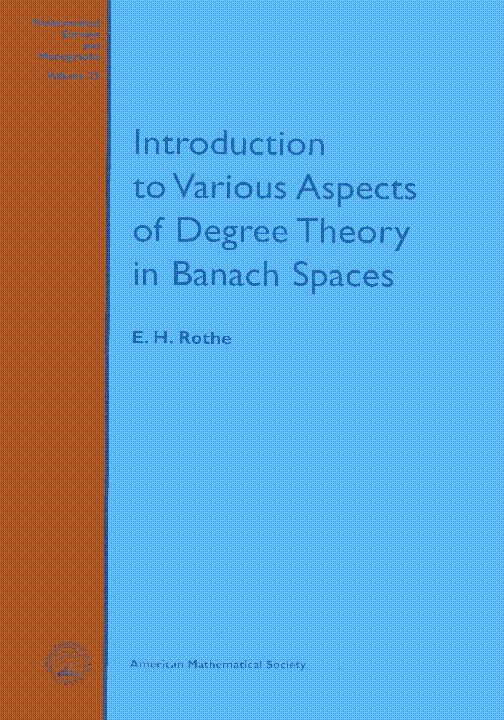 Click above image for expanded view
Introduction to various aspects of degree theory in Banach spaces
E. H. Rothe
Available Formats:
Add to cart
Bundle Print and Electronic Formats and Save!
This product is available for purchase as a bundle. Purchasing as a bundle enables you to save on the electronic version.
Add bundle to cart
Mathematical Surveys and Monographs
Volume: 23; 1986; 242 pp
MSC: Primary 47; Secondary 54; 55; 58;

Since its development by Leray and Schauder in the 1930's, degree theory in Banach spaces has proved to be an important tool in tackling many analytic problems, including boundary value problems in ordinary and partial differential equations, integral equations, and eigenvalue and bifurcation problems. With this volume E. H. Rothe provides a largely self-contained introduction to topological degree theory, with an emphasis on its function-analytical aspects. He develops the definition and properties of the degree as much as possible directly in Banach space, without recourse to finite-dimensional theory. A basic tool used is a homotopy theorem for certain linear maps in Banach spaces which allows one to generalize the distinction between maps with positive determinant and those with negative determinant in finite-dimensional spaces.

Rothe's book is addressed to graduate students who may have only a rudimentary knowledge of Banach space theory. The first chapter on function-analytic preliminaries provides most of the necessary background. For the benefit of less experienced mathematicians, Rothe introduces the topological tools (subdivision and simplicial approximation, for example) only to the degree of abstraction necessary for the purpose at hand. Readers will gain insight into the various aspects of degree theory, experience in function-analytic thinking, and a theoretic base for applying degree theory to analysis.

Rothe describes the various approaches that have historically been taken towards degree theory, making the relationships between these approaches clear. He treats the differential method, the simplicial approach introduced by Brouwer in 1911, the Leray-Schauder method (which assumes Brouwer's degree theory for the finite-dimensional space and then uses a limit process in the dimension), and attempts to establish degree theory in Banach spaces intrinsically, by an application of the differential method in the Banach space case.