Item Successfully Added to Cart
An error was encountered while trying to add the item to the cart. Please try again.
Continue Shopping
Go to Checkout
OK
Please make all selections above before adding to cart
OK
The following link can be shared to navigate to this page. You can select the link to copy or click the 'Copy To Clipboard' button below.
Copy To Clipboard
Successfully Copied!
The Classification of the Finite Simple Groups, Number 3
Daniel Gorenstein
Richard Lyons :  Rutgers University, New Brunswick, New Brunswick, NJ
Ronald Solomon :  Ohio State University, Columbus, OH 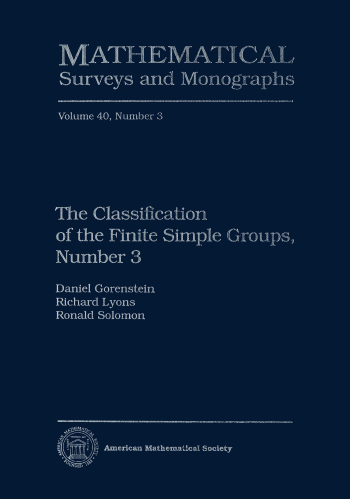 This volume offers a wealth of basic facts and computations. Much of the material is not readily available from any other source. In particular, the book contains the statements and proofs of the fundamental Borel-Tits Theorem and Curtis-Tits Theorem. It also contains complete information about the centralizers of semisimple involutions in groups of Lie type, as well as many other local subgroups.

Graduate students and research mathematicians interested in the subgroup structure of the finite simple groups of Lie type, the alternating groups and the sporadic simple groups.