Item Successfully Added to Cart
An error was encountered while trying to add the item to the cart. Please try again.
Continue Shopping
Go to Checkout
OK
Please make all selections above before adding to cart
OK
The following link can be shared to navigate to this page. You can select the link to copy or click the 'Copy To Clipboard' button below.
Copy To Clipboard
Successfully Copied!
Arithmeticity in the Theory of Automorphic Forms
Goro Shimura :  Princeton University, Princeton, NJ 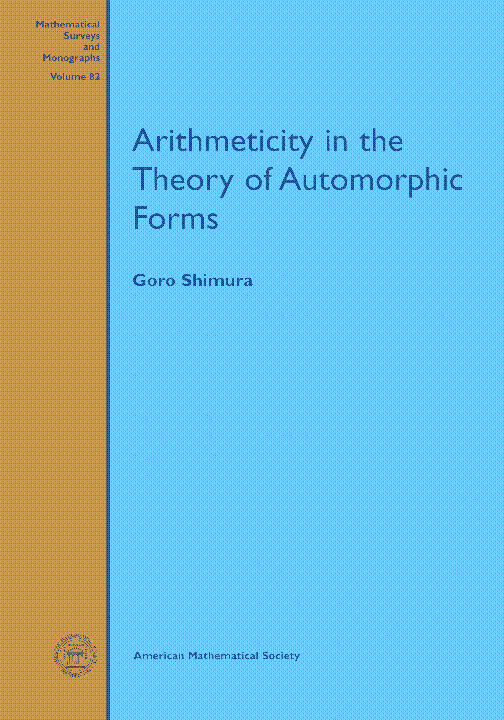 Click above image for expanded view
Arithmeticity in the Theory of Automorphic Forms
Goro Shimura :  Princeton University, Princeton, NJ
Available Formats:
Add to cart
Bundle Print and Electronic Formats and Save!
This product is available for purchase as a bundle. Purchasing as a bundle enables you to save on the electronic version.
Add bundle to cart
Mathematical Surveys and Monographs
Volume: 82; 2000; 302 pp
MSC: Primary 11; 14; 32;

Written by one of the leading experts, venerable grandmasters, and most active contributors \(\ldots\) in the arithmetic theory of automorphic forms \(\ldots\) the new material included here is mainly the outcome of his extensive work \(\ldots\) over the last eight years \(\ldots\) a very careful, detailed introduction to the subject \(\ldots\) this monograph is an important, comprehensively written and profound treatise on some recent achievements in the theory.

The main objects of study in this book are Eisenstein series and zeta functions associated with Hecke eigenforms on symplectic and unitary groups. After preliminaries—including a section, “Notation and Terminology”—the first part of the book deals with automorphic forms on such groups. In particular, their rationality over a number field is defined and discussed in connection with the group action; also the reciprocity law for the values of automorphic functions at CM-points is proved. Next, certain differential operators that raise the weight are investigated in higher dimension. The notion of nearly holomorphic functions is introduced, and their arithmeticity is defined. As applications of these, the arithmeticity of the critical values of zeta functions and Eisenstein series is proved.

Though the arithmeticity is given as the ultimate main result, the book discusses many basic problems that arise in number-theoretical investigations of automorphic forms but that cannot be found in expository forms. Examples of this include the space of automorphic forms spanned by cusp forms and certain Eisenstein series, transformation formulas of theta series, estimate of the Fourier coefficients of modular forms, and modular forms of half-integral weight. All these are treated in higher-dimensional cases. The volume concludes with an Appendix and an Index.

The book will be of interest to graduate students and researchers in the field of zeta functions and modular forms.