Item Successfully Added to Cart
An error was encountered while trying to add the item to the cart. Please try again.
Continue Shopping
Go to Checkout
OK
Please make all selections above before adding to cart
OK
The following link can be shared to navigate to this page. You can select the link to copy or click the 'Copy To Clipboard' button below.
Copy To Clipboard
Successfully Copied!
Cohomology of Arithmetic Groups, $L$-Functions and Automorphic Forms
Edited by: T. N. Venkataramana :  Tata Institute of Fundamental Research, Mumbai, India
A publication of Tata Institute of Fundamental Research 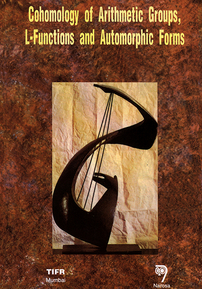 This collection of papers is based on lectures delivered at the Tata Institute of Fundamental Research (TIFR) as part of a special year on arithmetic groups, \(L\)-functions and automorphic forms. The volume opens with an article by Cogdell and Piatetski-Shapiro on Converse Theorems for \(GL_n\) and applications to liftings. It ends with some remarks on the Riemann Hypothesis by Ram Murty. Other talks cover topics such as Hecke theory for Jacobi forms, restriction maps and \(L\)-values, congruences for Hilbert modular forms, Whittaker models for \(p\)-adic \(GL(4)\), the Seigel formula, newforms for the Maaß Spezialchar, an algebraic Chebotarev density theorem, a converse theorem for Dirichlet series with poles, Kirillov theory for \(GL_2(\mathcal{D})\), and the \(L^2\) Euler characteristic of arithmetic quotients. The present volume is the latest in the Tata Institute's tradition of recognized contributions to number theory.